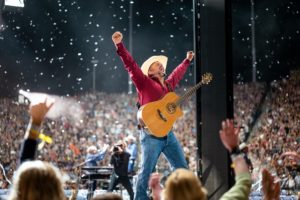 In a vitrual press conference he stated it’s time for the future of country to get this award.  After his most recent win Garth said a tweet stuck with him that said “Hey man, this guym why doesn’t he step down and have the Entertainer be for the next generation” Garth did joke that maybe the CMA’s could make him Entertainer Of The Year Emeritus, but the folks at the CMA’s said they cant just create a new title, which in reality they totally could because they created all the titles they give out.

Garth will continue to snag awards in other categories meaning he will still need more room on his trophy shelf, but maybe finally Eric Church can get the recognition with the EOTY trophy that his fans feel is over due.