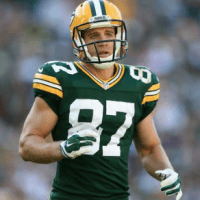 Jordy Nelson spent the off season recovering from hip surgery, and it looks like another operation might be coming soon. His hip recovery had progressed well, and it appeared Jordy was back to “Full Nelson” ability. Report is Nelson tore his ACL during the 1st quarter of the preseason game against the Steelers. Wish Jordy, his family, and the Pack all the best during the injury, but it looks like there will be “Zero Nelson” this season for the Packers.